The HOPE for the Future Alzheimer’s Study LEARN MORE


HOPE is a resource to our community for people with and without memory concerns. This research will help ensure Black Americans benefit from new developments in diagnosis and treatment. Learn more. You may be eligible to participate if you:

African American parents are invited to join this research study about culture and parenting practices. You will receive a $25 Gift Card for participating. You might be eligible if you identify as African-American (Black American) and you have a child between the ages of 4 and 12.

This research study is about family life with African American and Black parents. Please click on the image to pull up the brochure details. 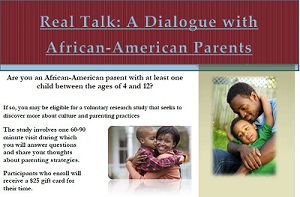 In 2006, AboutBlackBostonOnline was the first to onboard people of color to join the RESPect Registry, a multi-cultural, central list of research projects and volunteer participants compiled by Boston University Medical Center (BUMC). A recent ProPublica investigation found that African-Americans are underrepresented in clinical trials for new cancer drugs, denying them the opportunity for potentially lifesaving treatment.

Take a day off for a relaxing day trip. Here's one.

Who should volunteer for research studies?

We encourage people of color to consider participating in National Institute of Healthy sanctioned and other credible social and medical non-invasive research studies. When people of color participate, the products and services informed by the research will work better on patients of caregivers.

Learn more
Transportation service news
In 2011, 87 Black graduates of Howard University applied to medical school. And, Xavier University in New Orleans had 68 Black graduates who applied to U.S. medical schools according to the Association of American Medical Colleges. These schools were the leading suppliers of US black doctor talent but you can see there's not that many of us entering the grid, no matter what Shonda Rhimes wants you to believe about her Grey's Anatomy TV show.

Dorchester and Jamaica Plain residents can count on the stable Harvard Health Care Clinic at the intersection of Franklin Park, Blue Hill Avenue and Columbia Road. Codman Square has the Codman Square Health Center, Mattapan has the Mattapan Community Health Clinic - the newest of them all.

Touch 106 FM had a kidney specialist on the TMS show. During the broadcast it was stated that there are 5,000 people in Massachusetts who have End Stage Renal Failure and 2,270 were awaiting a kidney transplant in the year 2011.

NxSTAGE-a Waltham-based manufacturer of home kidney dialysis machines is experiencing fast growth. It was named the 10th fastest growing company in the nation by industry analyst and word is that they are giving Fresnius and Davita, the German and Warren Buffet owned kidney dialysis treatment facilities in Massachusetts - some competition. NxSTage is planning to open local kidney dialysis centers because demand for home dialysis is growing in leaps and bounds. NxStage provides the machines and supplies. It competes against BAXTER in the ancillary supply business. The Boston Business Journal has reported that NxStage hired 200 extra employees last year and plans to increase hiring worldwide through 2014 and 2015.

Hypertension and Diabetes is causing more and more Americans to suffer from Kidney disease. Predicting a 22% increase in diagnosed patients going forward, its evident that too many people are simply not getting to the doctor earlier enough to prevent kidney failure.

Multiple Myeloma
The cancer drug VELCADE, a popular prescribed component in the RVD regime ( Revilmid, Velcade, Dexamethasone ) applied to multiple myeloma patients scored a big win. The U.S. Food and Drug Administration (FDA) has approved VELCADE® (bortezomib) for the retreatment of adult patients with multiple myeloma (MM) who had previously responded to VELCADE therapy and relapsed at least six months following completion of prior VELCADE treatment. The labeling update includes dosing guidelines as well as safety and efficacy findings for the use of VELCADE as a single agent or VELCADE in combination with dexamethasone in patients previously treated with VELCADE.
view full article.

future highlights
KING BOSTON
On Boston Common, new public art installations are going in by 2019 and from now until October 16th you can take part in selecting the one you want to see. KING BOSTON is developing the memorial Martin Luther King, Jr., Coretta Scott King memorial installation and community programming that will educated Bostonians and Tourists about Dr. King's shared vision for the world. Of the five designs shown above, one will be selected by the committee and the public for permanent installation on Boston Common. One of the designers was responsible for designing the amazing Smithsonian National Museum of African American History and Culture on the Mall in Washington DC.

Walk into Massachusetts General Hospital, the Brighams and Women's Hospital, Children's Hospital, Boston Medical Center or Tufts and what do you see? You'll see a diverse administrative staff and health industry professionals. If you are in a major hospital and see a Black doctor walking across the lobby, you should take a picture because Black doctors at the big ones are rare, because a majority of physicians of color work in neighborhood health clinics and they probably go there by choice, not because of forces they can't control.

You don't need a black doctor in Boston to get quality health care in Boston becausew staff professionals get the job done well.

There are far more technical founders of color starting web based internet companies than there are Black doctors entering medicine. Software is eating the world and mHealth mobile apps are a hot commodity.

"Black residents in Boston face health inequities in almost all health conditions" were key findings of the State of Black Boston 2011 which was authored by the Urban League of Eastern Massachusetts. Poltical arguements about the life expectancy of a Black Bostonian are alarming. We often hear that a Black living in a Black Boston neighborhood has a much shorter life expectancy than a white person living in the Back Bay. I don't know about you but something seemd odd about that statistic to us.

"Black residents in Boston face health inequities in almost all health conditions" were key findings of the State of Black Boston 2011 which was authored by the Urban League of Eastern Massachusetts.

Harvard Street Neighborhood Health Center is certified as a "Provider of the underserved" by the Commonwealth of Massachusetts and is located in a federally designated "Empowerment Zone," aka, Black Boston and Blue Hill Avenue across from the Franklin Park Zoo and the William J. Devine Golf Course and Club House. Mattapan Community Health Center (MCHC) has a brand new building and a financially secure lease contract with a CVS Pharmacy. MCHC serves primarily Black/African Americans, and Caribbean Immigrants, managing more than 7,000 individuals annually through 26,000 visits.

Why did a medical researcher in the Southern part team with a church to get volunteers into a medical trial?
story coming soon
watch for it
Contact us about your story.
List a Reseach Study
Search of Mail List Feature Input form
this is near the mail list search form feature
This is near the search form mail list feature. To be determimed what side of the page it appears on
Read More
Health Journal
Full Story:

Our interview with singer Pattie Austin. She discusses her friendship with Luther Vandross and his unfortunate passing due to his health. We produced this article in association with the "Power to End Stroke" campaign on behof of the Universal Verve Music Group record label.

written by William Murrell
interviewed by K-lee
Why do Blacks distrust Clinical Medicine Trials?
coming soon
The article will explore the story about Blacks in the South who were being tested without conscent.

Perhaps you have heard something about it. Myths and misunderstandings have developed about the project. We will write it up to set the record straight. Experimental medicine trials are NOT for everyone. While AboutBlackBostonOnline.com has no experimental medicine listings on the site, we believe those in need should carefully consider them when there is no other option available to you, with advice of your doctor of course.

How are the research studies we advertise different than clinical trials?
No Pharmaceuticals are involved
FEEDBACK FORM
Charter a Grop Bus
Black Boston Tours
Jazz Club Dates
Our Travel Journal
Meditate in the Morning

Our Transportation Department Provides:
Airport pickups transfers to hotel.
Charter bus pricing
Shuttle Bus Pricing
Trolley tours
For a price quote.
Submit a request.
Black numbers
For data questions
Ask us
RECRUITMENT OVERVIEW
Since 2006, we have recruited Blacks in Boston and African Americans to volunteer with your research study.
We can help you recruit.
Advertise your study

For logo and link

The Religious Portrait of African Americans in 2009

Jubilee Christian Church is the largest black church in Greater Boston. They bought their building on Blue Hill Avenue in Mattapan and purchased another one from Catholic owners in Stoughton to accommodate their large membership. Branded the Church without Walls. in the 80's because church service was held at rentable spaces across the cityt,. Jubilee operates the Axiom music recording studio, the Sanctuary Books store and a dozen other projects. It owns a lot of real estate. Jubiliee may have more Havard-educated church members than other churches

seek happiness
we use Kuli organic Moringa
Initiatives
Power to End Stroke
Our interview with Grammy-award winner, singer Pattie Austin about her friend Luther Van Dross and how his high blood pressure affected his health.
for a topic
text for topics
Ayanna Pressley
US CONGRESS
1108 Longworth HOB
Washington, DC 20515
Phone: (202) 225-5111