There were few Entertainment breakout news stories during the Covid-19 pandemic. Now this. The Warner Music Group Label will IPO any day now. An IPO is an intial public offering of stock. Do you remember the Facebook IPO when it opened at $15 per share? Today, Facebook trades for over $200 a share. Warner Music Group hopes investors will pay in $1.7 billion dollars cash to its balance sheet in exchange for a piece of the world’s leading music entertainment companies.

What will they use the $1.7 billion dollars for? Why do they need it now?

The timing is an interesting question because the stock market has been unpredictable since the deep March 2020 crash. Warner bets investors will pay $23-$25 a share on IPO day.

I'll tell you Warner needs cash to acquire and develop the new artists. It needs cash to win the streaming media wars. That's what I think. What the company plans to do with investor's money is disclosed in the prospectus.

The firm has an extraordinary publishing catalog. It has works by over 80,000 songwriters and composers and a global licensing cash register of more than 1.4 million musical compositions. That's nice!

These statements were provided by Warner to the US Securities and Exchange Commission on May 26, 2020, an AMENDMENT NO. 2 TO FORM S-1 REGISTRATION STATEMENT UNDER THE SECURITIES ACT OF 1933. The IPO may happen any day. This item was posted Saturday, May 30th, 2020. When we looked for the stock listing 5/29 the symbol "WMG" had not been added to the stock exchange yet. 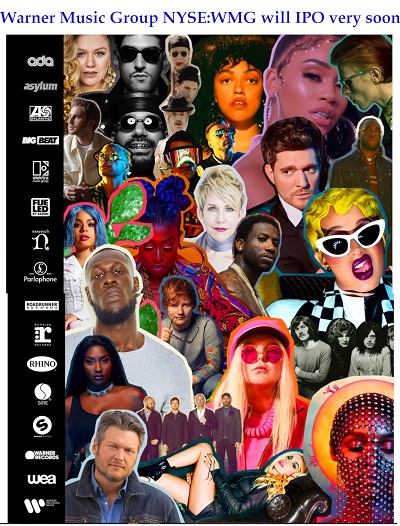 Some artists on the label are Ed Sheeran, Bruno Mars, Cardi B, Janelle Monae, and many more. Their records brought the company $3.840 billion of revenue in fiscal 2019. In 2019, Boston Calling Headliners Twenty-One Pilots closed one day of the show. For Warner, Twenty One Pilots, Lizzo and Katy Perry are a few of their songwriters who generating $643 million of revenue in fiscal 2019.

FULL DISCLOSURE: Download the official investment prospectus for the firm.

What About us Music Buyers?

This writer does not buy music. I stream.

When I stream I take notes about what I'm listening to. The good stuff may get bought but not regular good stuff. I am buyng artists I have never heard of before and would not know about if I had not heard them on my streaming device. Our favorite streamers are: For Smooth Jazz its PANDORA. For pop sound, Hip Hop and new music its SPOTIFY. We don't do TIDAL. We do a little bit of AMAZON MUSIC. We have APPLE and YOUTUBE MUSIC available but we are not subscriber to them.

I bought my first guitar while studying electronics at Devry in Atlanta. It was an old Gibson ES125. It was cheap and I eventually sold it for something I thought was better. Boy, that was a mistake. I found out years later that that Gibson was worth far more than the DEAN acoustic I bought at the Guitar Center across from Berklee to make some music with. Far more!!! I saw one like it hanging in an Allston music store for over $2,000. I had bought mine for $175 from a pawn shop way back then, but I had no idea what I had, just that it had a George Benson guitar sound and look to it.

We made an albumn with the DEAN guitar. It was shipped from our homemade studio to ITunes, EMusic.com and the early Amazon MP3 music stores. Me and some partners I met on Facebook who were from the UK, created a company named BIG EAR that was on its way to build a BIG EAR type ITUNES music server, but something better than ITUNES. Our product used FLAC for music compression and it was not rights-limited.

We did well for a while. After a meeting with angel investors at Billboard headquarters in New York (2006), one gave us a thumbs up for $700,000 to invest in Big Ear. A launch plan was being formulated to open in 15 major US music markets. Boston would go first. But, when the economy tanked shortly after we got the go ahead, the real estate market failure caused our investor to pull out. He could not come up with the $700K. The investor pulled out and the project died. While the project was happening we lived it up in Hoboken New Jersey for a week planning and putting the pieces of the puzzle together. It was great fun. Big Ear's novel idea was to hire unsigned musicians and support them with live shows, recording and professional distribution on the Big Ear sy system we were making. We pledged to sign and pay artists exactly what they were making in their part time "don't care" jobs so they could focus on making great music. It still sounds like a fine idea but only if an artist can get traction within 90 days, because today -- there is so much new music being released everyday that if a track don't hit soon, it won't ever hit, more than likely. I think marketing and artist talent is what will differentiate artists because a lot of the Youth to Young Adult music releases sound so familiar. I am struck by young talents such as HER and people like her who are a triple-threat performer, singer, songwriter. If the musician is not a triple threat then I think their chances of making big moves are limited.

Making music people will buy is very very hard. An album we recorded on an 8-bit sound rig running Windows, ITunes and Garageband titled Full Moon September, was released on our BlackSoftware.com SpiritDatatree Music label in 2010. The journey brought us an official ASCAP membership in the Writer, Publisher and Performer category. That was fun. The credential and licensing will last a lifetime. So will the songs.

How do you discover new music you like? | GO FEEDBACK

TRENDS: According to the Warner IPO prospectus, consumers engage with music in more ways than ever and global consumers spent 18 hours listening to music each week in 2019. Demographic trends and smartphone penetration have been key factors in driving growth in consumer engagement. Younger consumers typically are early adopters of new technologies, including music-enabled devices.

Members of older demographic groups are also increasing their music engagement. According to an IFPI survey of 19 leading geographic markets in 2019, 54% of 35- to 64-year-olds used a streaming service to listen to music in the past month, representing an increase from 46% in 2018, which was the highest rate of growth for use of streaming services across all age groups.

Promotional offers for Boston area visitors and groups who will be staying overnight.

Start your information gathering here. We will exchange information or schedule a service meeting.