HOT NEWS
What brings you to Boston? Relatives?
Business or Leisure?
Family? Well, all are welcome to our Neighborhood

Boston was founded by church members. People are asking about Black churches in Boston. Visitors want to know where to go. They want to hear gospel music They want to attend church service at a place of worship convenient to hotels. We've heard from black social groups, tourists from Ireland and business and general travelers moving around the Greater Boston area. There are many choices today. Boston may be known as a music town, but it was a Church Town first.
continued ....

The first black Baptist congregation in North America was organized 1788 in Savannah, Georgia. This claim of "first" is contested by the First Baptist Church of Petersburg, Virginia.

The Bible was written around the time of the destruction of Jerusalem in 586 BCE. On April 11, 2016, this evidence was found by researchers of Ben-Gurion University, Be'er Sheva. Israel, who study the origin of Biblical texts. There were 16 inscriptions from the Judahite desert fortress of Arad, dated on the eve of Nebuchadnezzar’s destruction of Jerusalem.

The first African American church in Boston was founded in 1805 under the leadership of Thomas Paul, but in conjunction with the white First and Second Baptist Churches of Boston. They built their meeting house on Smith Court Beacon Hill and met there from 1806 to 1898. This is the site of the Museum of African-American History (MAAH) and remains the oldest black church structure still standing in the United States. The MAAH was fully restored to its 1855 appearance and recently re-opened as a national treasure.

Boston Praise Radio and TV online and on the air is operated by Reverend Bruce Wall of Global Ministries. Hear the broadcast online at Youtube, Facebook and TuneIn or at the web site BostonPraiseRadio.tv.

The First Black Church in the United States

The Rev. Richard Allen is credited with founding the African Methodist Episcopal Church known today as Mother Emanuel A.M.E. of Phildelphia and Charleston South Carolina. Both are very active churches today offering regular Sunday service, Internet broadcast service on Sundays and their are pillars in their communities. Today, there are thousands of A.M.E. churches all over the world. Closer to home in Boston, St. Paul A.M.E of Jamaica Plain and Bipshop Allen Drive in Cambridge are two of the most well known. Charles Street A.M.E. on Warren Street in Black Boston is located in the Grove Hall section. The head of the A.M.E. church family works from the mother church in Philadephia. The site is also a museum and popular tourist stop. Downstairs, the museum unravels the complete history of the A.M.E. Church from its humble beginnings to the present day. Bishops are assigned to A.M.E. churches around the world from Philadephia.

The A.M.E. Church is different than the A.M.E. Zion Church.

The African Methodist Episcopal Zion headquarters church is located in Brooklyn New York. It is a majestic building. The worldwide members of the A.M.E. church is larger than the A.M.E. Zion church. Pleasant Ridge A.M.E. Zion ( African Methoist Episcopal ) is my family church, thanks to my mom. Why she chose to go there when I was a baby rather to go to one closer to the house name High Springs Baptist church, I will never know.

Black Ministers and the Emancipation Proclamation

It was Black Ministers who were meeting with President Abraham Lincoln about what to do about "free slaves." And, they engineered the thinking behind the document commonly known as the Emancipation Proclamation. It was their idea that became Lincoln's legacy. Masses of black people gathered in South Carolina assuming they were to receive 40 acres and a mule. New England abolitionists staffed the project with teachers. Later, the African American AME Zion church was born up north. And the rest is history..
Religious Groups and Church Activities in Greater Boston
options

Tour Site link
Black Boston lifestyle
Tours are great activities to spend your time doing in America's first city. A Dr. Martin Luther King, Jr., and Corretta Scott King Memorial is being installed on Boston Common with programming to occur at 12 Baptist Church and presumably the Roxbury library. You can experience a wide range of African American history. Boston shows off its Puritan statues and monuments. There are important landmarks and historically significant sites established by Black Afrians and the Puritans Pilgrims of Plymouth Rock fame. Tourist attractions include boat and trolley rides. Boston's world-class museums also include African Amercian art and history museums. Colonial Boston history is popular with the tourist. They go to the Boston Tea Party Museum, Plimoth Plantation in Plymouth. There is a long list of things to do and places to go to entertain, educate and inspire.

more info
Bostonia
Review:Jazz Live at the Bethel A.M.E. Nov 12, 2017
with the Ron Reid Jazz Quartet and church community
I have heard great things about this church. There was a recent live jazz concert at Bethel. It had a good crowd. Most everyone were church members. They were warm and friendly, making a point to introduce themselves to me "the stranger." I went with friends who attend Sundays. The jazz sound and presentation was excellent. The folks behind me made a point to make eye contact and smile. I like the experience. I'll go again and I recommend you do. There is a huge bible in front of the bandstand which serves as the pulpit during day time service. Its one of the biggest bibles I've ever seen!
A section for future informaiton
Read More
Black Boston History note
On Boston Common, new public art installations are going in by 2019 and from now until October 16th you can take part in selecting the one you want to see. MLKBoston, Inc. is developing the memorial Martin Luther King, Jr., Coretta Scott King memorial installation and community programming that will educated Bostonians and Tourists about Dr. King's shared vision for the world. Of the five designs shown above, one will be selected by the committee and the public for permanent installation on Boston Common.
One of the designers was responsible for designing the amazing Smithsonian National Museum of African American History and Culture on the Mall in Washington DC.
Read More
This was for the School Department, redo it:
Future Information State School Districts
A future information section
A section were future information can be added before getting to the div mark
Read More
FUTURE INFO - coming soon
Search of Mail List Feature Input form
this is near the mail list search form feature
This is near the search form mail list feature. To be determimed what side of the page it appears on
Read More
TOPICS
option
content
Read More
option
content
Read More
option
content
Read More
sections
option
content
Read More
option
content
Read More
option
content
Read More
Black Boston Church info
we carry Black Boston souvenirs
T-shirts
accessories and apparel
>more info
oldest Black church, Beacon Hill
on the Black Heritage Trail
Black tour catalog
Things to do
Events
webinars, the arts and more
Black-owned charter bus supply
shuttle, van and motorcoach bus
more info
Black Boston Book authors
Book stores
Local Black authors
find a Black-business owner
searchable listings
MBE, women-owned, #BuyBlack trade
Short Cuts
CHURCH REVIEWS

Jubilee Christain Church is the largest black church in Greater Boston. They bought their building on Blue Hill Avenue in Mattapan and purchased another one from Catholic owners in Stoughton to accommodate their large membership. Branded the Church without Walls. in the 80's because church service was held at rentable spaces across the cityt,. Jubilee operates the Axiom music recording studio, the Sanctuary Books store and a dozen other projects. It owns a lot of real estate. Jubiliee may have more Havard-educated church members than other churches

Motivation Church of Randolph Ma. recently moved to a building in Crawford Square that used to be a night time hip-hop club. Motivation Church attracts younger people. If you are over 55 you may be the oldest person attending. The pastor and churh vibe there is awesome. And the singing is surberb!

Bethel AME Church in Jamaica Plain is on Walk Hill Street. I seem to always be passing by Bethel marveling at its classically serious wood front door, stone and and beautiful architecture.

The Presbytery of Boston church directory lists Afro-American, Hispanic, Taiwanese and Korean churches within a 40 mile radius of Boston.

St. Stephens Episcopal Church is located in the South End across from Washington Park. Vicar Tim Crellin and Director of Youth Programs Liz Steinhauser are some amazing people. I've worked for them a number of years. Installing the first WIFI and downstairs computer lab, file server and extending the network beyond the front office, I've spent many hours there and know its a quality church and South End community center.

Holy Tabernacle Church on Washington street Dorchester is next to Muhammad's Mosque No. 11. in Roxbury a few doors down. Holy Tab church is a major community influence with a beautiful interior and one of the most dedicated media production volunteer staffs you will ever find in a black church. And the music made there is amazing and the service is too. The church operates a really important food pantry for the neighborhood. Its location is beside the Jermiah Burke High School in Dorchester.

St. Paul AME Church in Cambridge, MA is located in Central Square. A Rev. Jeffrey Brown, who was selected to the leadership of the failed Boston Olympics Committee and has been go to for politician seeking to the black church community is connected to St. Paul. A.M.E church.

Charles Street AME Church, Roxbury in the Grove Hall section in Boston at the Roxbury Dorchester line is one of the oldest churches around. Charles Street AME (CSAC) is an education - conscious congregation located at 551 Warren Street Roxbury, MA 02121. The pastor received an appointment to the Boston School Committee by the mayor in 2007 and left the position in 2013.

United House of Prayer Church ( web site ) has multiple locations in Greater Boston. It has a beautiful building of worship and food kitchen across form Franklin Park on Seaver St., right around the corner from NCAAA - the National Center of Afro-American Artists museum. The restaurant is known for its soul-food cuisine. 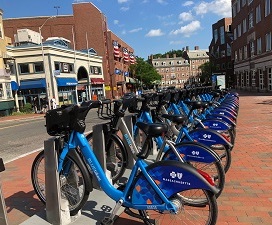