NONFICTION
Black Software, a movement with Roxbury and Cambridge roots 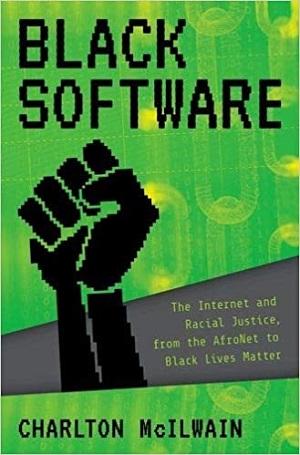 BLACK SOFTWARE: The Internet and Racial Justice. From the AfroNet to Black Lives Matter
By Charlton Mcilwain, hardcover 2019

This BlackSoftware.com venue opened online 1998 as a Black Software distribution platform, defining "blackSoftware" as brand new genre of software product as unique and representative as Black movies, Black Films, Black Literature, Black Fine Art and the Black Music genres before it had been. blackSoftware users wanted software choice. McIIwain examined what the AFRONET did for this new genre. Charlton's expertise in ethnic communications is telling. He linked roles the AFRONET played in shaping the Black online community as we know it today. In this work the author positions the historical use of the AFRONET and the Black Lives Matter movement as necessary tools for racial and social justice activists.

The Internet has changed popular culture but it took years for it to become a household word. Online publishers are in competition for Black people to spend money and use their websites. It is an all-out war to capture the Black Digerati. But before the Internet reached mass adoption, there was the AFRONET, an online pathway created by independent Black computer hobbyists located around the country.

Boston had an AFRONET on ramp named The SpiritDatree BBS created by this webmaster, William Murrell. The AFRONET was introduced in Boston by Ken Granderson, CEO of InnerCity Software, the creative media and code-production company in Roxbury, known for its production of the multimedia CD-ROM and mobile kiosk for historian Robert Hayden's 350 Years of Black Boston History" book.

The author Charlon Mcilwain, a faculty member at New York University where he is the Associate Professor of Media, Culture, and Communication, chronicles the invention, application and deployment of the AFRONET. He exposes its agitators. He reminds consumers and the Internet industry that there were Black people building the Information Superhighway in the raw, while molding it for mass consumer use, activism and economic sustainability.

The history of the blues video documentary can be watched here online.

How the Internet enables independent Black-owned media to scale.

The brand new Black-owned digital news show Roland Martin Unfiltered went live nationwide on September 4th, 2018. First takes - I watched the show opening night and it is awesome! with a capital "A". The show airs "LIVE." Edits roll in video clips, photos and digital media support for the show's rapidly moving narrative. This is no simple talking head show. Commentators are animated, combative and have something substantial to say. They fight to be heard. The product is a high energy viewing experience made in a an studio studio background. Picture quality and sound are perfect despite of limitations using the public internet system for distribution. Roland Martin Unfiltered is a professionally produced, multi-channel, digital, informed product on the level of a national broadcast TV show such as Good Morning America or CBS News. For Black People in the World, this show is accessible everywhere the internet goes. It is almost as good as it gets. You will be hard pressed to find a better Black celebrity-driven TV News & Commentary show like this anywhere.

You may know Mr. Martin from TV ONE cable broadcasts. They cancelled his show when some of the best programming for radio and tv was put on the chopping block. Poor ratings, was the reason, they said. Well, no wonder. many people have cut the cord (cable) and get their news online. But there was void in the national black news sector when Martin went off air Great to see him back with energy and a new business model. First, he owns the thing. The business hopes financial support comes from 20,000 people at $50/yr, but the show is free to all. He makes the case that if black people want to own their media and control their own narrative, it will take money to do it. This is true. Roland has a professional staff and booku expenses. Putting a level of investment behind the Roland Martin Unfiltered sets the product apart from others.

Let's compare RolandMartinUnfiltered.com to a few other popular sites in the Black Cyberspace disaspora. BLAVITY.com - has raised $8mil to date. Its a 12 person operation. TheShadeRoom.com has a 12 person staff with several milion in ad revenues. Moguldom.com, the black tech & crypto information online hub scaling to reach unicorn status, is the second act after its founder's black-oriented web site network was acquired by IONE Interactive One for $60mil. IONE is by the nation's largest Black radio and TV operator and has a minority ownership stake in the brand new MGM Grand Casino of Baltimore.

Millennials have been captured by BLAVITY.COM; Black Techies follow Moguldom; Fashion Creatives use Instagram; and all ages and interest types use a FACEBOOK product. The Roland Martin Unfiltered brand continues to discover paid subscribers. Mr. Martin left the TVone Broadcast Network and its millions of Black household paid subscribers. The brand link is RolandMartin.com/Unfiltered.com. We are bullish about the show. Wishing it much success! In 2017, there are more Blacks and people of color of Boston area television stations on air than perhaps at any time before, I think. Check me on that and let me know. On local TV news shows I see a diverse mix of female and male studio and field reporters covering the stories. Don't you? Let us know.
Boston Casting Calls and complimentary tickets to events
FEEDBACK FORM